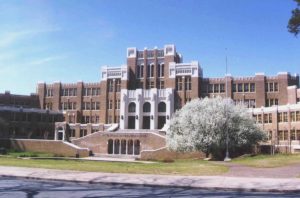 One of the most dramatic civil rights conflicts occurred in 1957 when Little Rock tried to desegregate its schools, starting with Central High School. The angry mobs that taunted the “Little Rock Nine” shocked a nation, and led U.S. President Eisenhower to call in federal troops to escort the students to class.

The story is told at a wonderful National Park Service visitors center, located in a converted Mobil/Magnolia gas station across the street from the school.  It was here that reporters set up camp to watch the conflict unfold.

Interactive exhibits take visitors through the Little Rock Crisis, as it was eventually named. It grew from the 1954 U.S. Supreme Court ruling, Brown v. Board of Education, which declared segregated schools unconstitutional. The Little Rock school board agreed to admit African-American students, but the local population literally fought back. The following year the city closed down all its schools so that it wouldn’t have to admit African-Americans.

When Central High School was built in 1927, the National Institute of Architects called it “America’s Most Beautiful School.” Guided tours are offered of Central High School (which is still operating ) on Mondays, Wednesdays, and Fridays during the school year at 9:15 a.m. and at 1 p.m.

A memorial is located on the State Capitol grounds.

Information on the crisis is available in Spanish here.

Peabody Hotel Little Rock Although not a gracious historic building like its Memphis counterpart, you still get to experience the twice-daily duck parade, and a convenient downtown location. Rates from $89.

Capital Hotel This beautiful historic hotel has been the city’s premier lodging for more than a century.  Upgrades have brought it into the 20th century, but if the walls could talk, what tales it could tell of Arkansas political wrangling and shenanigans. Average rate: $167.

Doe’s Eat Place — When Bill Clinton was president, he used to bring take out from Doe’s aboard Air Force One. Come here for steaks, Southern tamales, and tons of atmosphere.

River Market — Can’t decide between falafel, tacos, or chicken teriyaki, try this lively downtown food court in the midst of a bustling market.